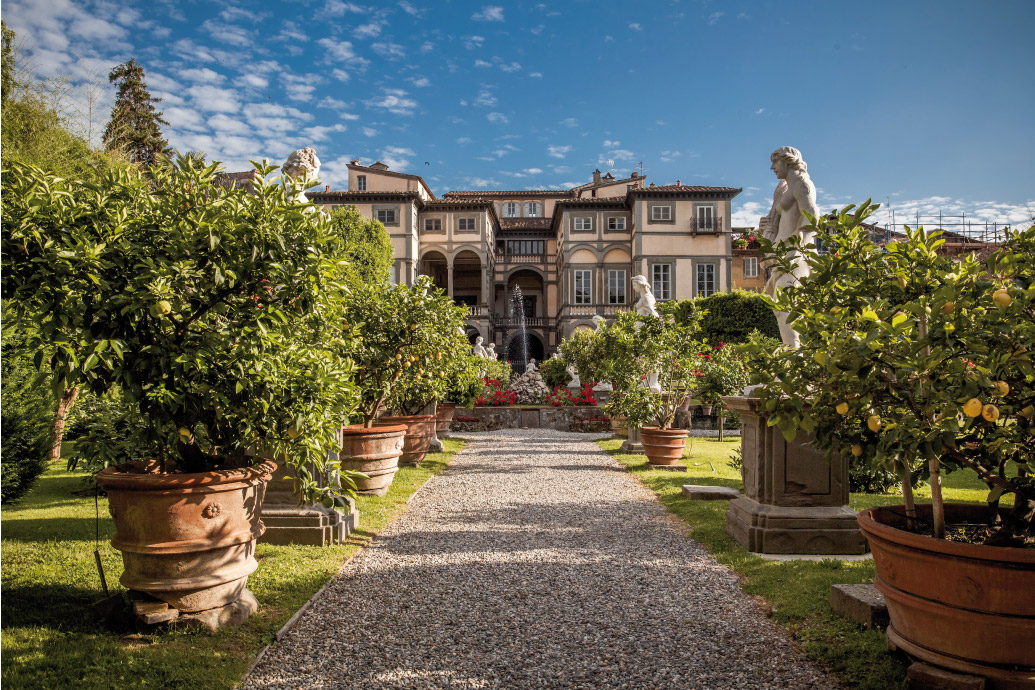 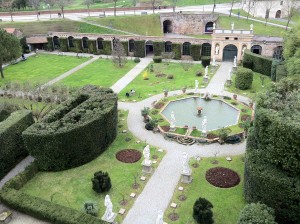 The scenographic garden of Palazzo Pfanner, attributed to the genius of Filippo Juvarra (1678-1736) who designed it at the beginning of the eighteenth century, represents a valuable example of an Italian-style baroque garden set between the town walls and the intricate maze of winding streets of mediaeval Lucca.

The garden extends from the monumental flight of steps of the palazzo towards the elegant north-facing lemon-house and the two historical bamboo groves which have framed this green area adorned with a rich variety of ornamental plants, palm-trees and secular pines for centuries.

In a triumph of colours and shapes that vary with the changing of the seasons, box and laurel hedges are set in among yews, magnolias, peonies and bushes of hydrangeas, antique camellias, begonias, roses and geraniums and a hundred or so antique earthenware vases of lemons placed at the sides of the two central paths.

At the point where the two paths meet there is a large octagonal basin placed at the centre of the so-called ‘formal garden’: here arranged one in front of the other along the central axis of the garden are eighteenth-century marble statues representing the divinities of the Greek Olympus, which silently watch over the incessant flowing of the waters.

For the whole of the second half of the nineteenth century up to the year 1929, the garden was the official premises of the Pfanner Brewery. During those years, under a pergola near the entrance gate, many townspeople from Lucca and visiting foreigners would come to sit and taste a tankard of Pfanner ale, immersed in an atmosphere of peace and quiet, among flocks of peacocks and livery-clad servants. The old ice-houses of this historical brewery still remain, as do the basins in masonry and, hidden behind a high hedge of laurel, the old workshops.

It is not surprising that some famous film directors have chosen the garden of Palazzo Pfanner to make their films, considering the charm and harmonious geometrical shapes of this beautiful green area. Most memorable, not to say famous,  are the scenes shot here with Alberto Sordi in Il Marchese del Grillo and with Nicole Kidman in Portrait of a Lady.