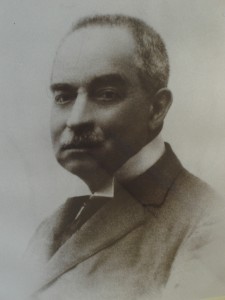 Pietro Pfanner was born in Lucca in 1864 to Isabella del Greco and Felix Pfanner. After graduating in medicine at the University of Florence, in 1910 he received his first great honour from the Home Secretary for service offered to the citizens of the town of Messina, seriously hit by the Calabrian-Sicilian earthquake of 1908 and the subsequent epidemic of cholera.
During the Great War, Pietro distinguished himself for his extraordinary ability and humanity in curing the wounded who came from the front; for this he was awarded the silver medal usually bestowed on meritorious citizens of the fatherland.
In 1918 he became Chief Physician of Surgery of the hospital of Lucca. In the meantime his own surgery, situated on the ground floor of Palazzo Pfanner, started to welcome patients from all social classes, from the great composer Giacomo Puccini, for whom Pietro was one of the personal medics, to members of the needier classes of the town.
No less committed was his activity centred around helping the townspeople. In 1920, encouraged earnestly by his numerous friends, he accepted the office of Mayor of the town of Lucca which he maintained until the year 1922.
Under his administration the works for a new aqueduct were set up and an efficient sewer system was created. When he finally ceased his public activity Pietro dedicated his time to scholarly research. He ventured upon a historical-artistic analysis of Palazzo Pfanner and an exhaustive cataloguing of the charity institutions in the town of Lucca, the results of which were published in 1936.
In 1931 he was nominated “Commendatore” of the Crown of Italy and Pope Pio XI conferred upon him the title of the order of S. Gregorio Magno  ‘in commendam’. At his death in 1935 the Municipality of Lucca rendered him many honours, naming the road to the hospital after him and affixing his commemorative locket in the Memorial Chapel of the town cemetery.