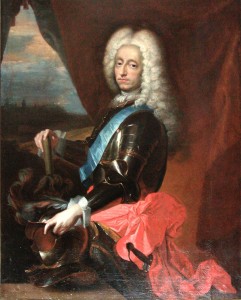 In May 1692 in what is now Palazzo Pfanner Carlo Controni received as a guest for three days Prince Frederick who had come to Lucca at the end of his tour around Italy. During this brief sojourn, the young prince fell in love with the beautiful and well-educated noblewoman Maria Maddalena Trenta who had been invited to the Palazzo to participate in the numerous banquets and balls organized in honour of the illustrious guest. The romance that bloomed between the two lovers, who were actually of different religious faith as he was Lutheran while she was Catholic, was destined to be brusquely interrupted as the prince was obliged to return to his native country. Thus their paths separated, but not forever. In 1699 the Prince became King Frederick IV of Denmark and Norway and married Luisa of Mecklenburg-Güstrow. Maria Maddalena decided to become a Carmelite nun and went to Florence where she took her vows in the monastery of Santa Maria Maddalena de’ Pazzi. In 1709, however, they were destined to meet once again.

King Frederick Iv, returning to Italy for a second tour of the country, was received in Florence by the Grand-Duke Cosimo III to whom he asked insistently to be permitted to meet his former love. The request was granted only with the consent of the Archbishop who initially was opposed to a Lutheran entering the old Florentine monastery. Permission was finally granted for them to greet each other once again and an intense conversation ensued between the two.

No-one knows what words passed between them but it is certain that the King came out of the monastery with ‘tears in his eyes’ and that he ‘got into his carriage and returned home and stayed shut up in his room without seeing anyone for about half an hour’.

Frederick IV wished to see Sister Maria Maddalena on four other occasions before going back to Denmark for good.